The Essence of Africa11:00September 9th, 2019
Moringa and sport – ultramarathon

Wolfgang Schwerk, born in 1955, is an outstanding athlete. He is a passionate runner. Not regular marathons, as they have become a mass phenomenon in the meantime, but extreme marathons. Schwerk actually starts at 62 miles. In fact, he prefers to participate at races with a fixed duration, i.e. 12h, 24h, 48h or even 6 days.

„A few rounds around the block“

The 3,100 miles run at the Sri Chinmoy Self Transcendence race in New York marked his longest running distance. Amazingly, he won this event in 2006 in 41 days, 8 hours and 16 minutes which is still the track record until today. To throw in additional spice, Schwerk ran 13 more laps around the blocks in New York’s Queens District to “fill up” the 3100 miles. Since 1987 Schwerk already holds the German record with 172 miles in 24h.

These days Wolfgang Schwerk starts to defend his title in the 6-day ultramarathon in Balatonfuered (Hungary) where he won in 2013 with a distance of 533 miles.

Schwerk goes to the limits of physical and mental performance.

Aside from an adequate physical and mental condition, nutrition plays a particularly important role for Wolfgang Schwerk in achieving such performances. Especially in ultra-marathons, the body has to be continuously supplied with nutrients. Simultaneously, it is important that the organism is not additionally burdened. Especially runners, racing cyclists or triathletes know the problem. The food must be pure, but the body, especially the stomach, is often irritated.

Wolfgang Schwerk, vegetarian, has found a good solution with organic Moringa powder from The Essence of Africa to provide himself with the necessary nutrients during an ultra-marathon.

The Essence of Africa spoke with Wolfang Schwerk about nutrition at the ultra-marathon, Moringa and sport.

Question: Mr. Schwerk, in a few days you will be defending your title at the 6-day ultra-marathon in Balatonfuered, Hungary. What role does nutrition play in such a race?
Answer: Diet plays an important role because during the run I cannot eat everything. An improper diet can cause stomach or intestinal problems. In general, I always have some things with me that are not offered by the organizers. For example, I mix green smoothies myself. Green smoothies are important to me. I have been using them for 3 years as part of my diet. Unfortunately, they are not offered anywhere at the races. Green smoothies contain the most important nutrients concentrated in natural form. And it does not burden the gastrointestinal tract. This is particularly important. I only consume things that do not burden me during the run.

Question: You enrich your food with Moringa, why?
Answer: Because the food is significantly enhanced by the concentration of natural ingredients in Moringa. In addition to the high protein content, it contains vitamins, minerals and above all antioxidants

Question: How do you take Moringa?
Answer: I’ll take Moringa in green smoothies. For me, this is the most digestible way to take up Moringa quickly, especially during races.

Question: How long have you been using Moringa?
Answer: A year ago, I was starting to get used to it. Since then it has been part of my nutrition plan and is an important component.

Question: How much Moringa do you eat during training, how much during competition?
Answer: At competitions I take a high amount of Moringa powder. The exact amount is my secret. During a normal training cycle I take about one kilo per month. You first have to get used to this amount.

Question: Why is there no adequate substitute for Moringa powder for you to supplement your diet?
Answer: The combination of nutrients the moringa tree provides… it just fascinated me. There is no comparable natural food, in which the nutrients are present in this combination.

Question: What advice do you have for all hobby runners and ambitious athletes who would also like to supplement their sports nutrition with Moringa?
Answer: Try out and experiment. It can be used in many ways. That’s what I do.

Mr. Schwerk, thank you very much for the interview. The Essence of Africa keeps the fingers crossed for your race in Hungary.

0
Minerals and trace elements for athletes: the significance of Moringa and Baobab
Teff-raspberry pudding 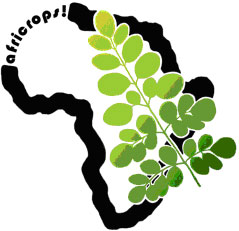 We use cookies to ensure that we give you the best experience on our website. If you continue to use this site we will assume that you are happy with it. OKPrivacy policy